I moved the three bike trip entries to its own page and deleted from the main blog. Here are the three entries, now in chronological order: 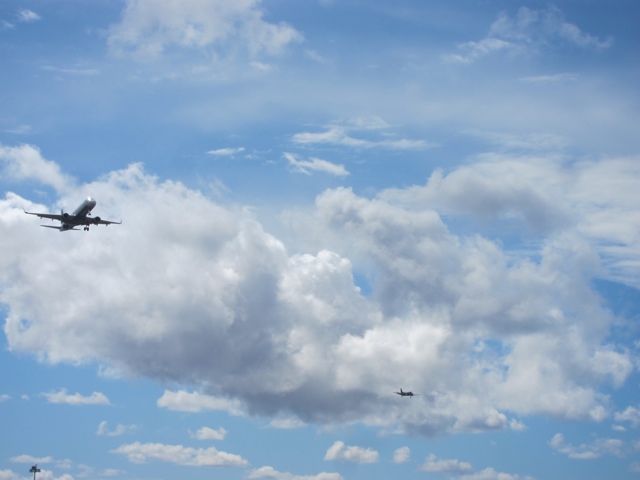 My ride, an Atlantis with a Bionx 350 watt pedal-assist kit.

After rolling off the ferry and announcing my arrival, I decided to wander for a few minutes before finding my hotel and grabbing lunch. Provincetown has a certain way of unfolding and revealing something interesting whenever you go around a corner, over a small hill and through it’s narrow, crowded streets. Pretty soon, I’ve drifted out of the town itself and onto some equally alluring roads, which led to a bike trail. 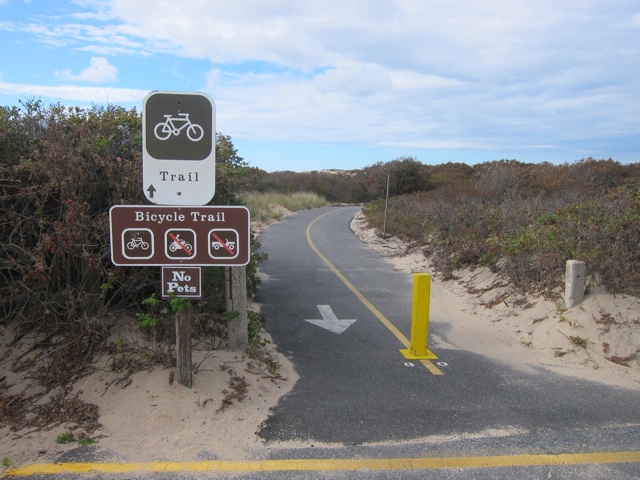 The trail winds through dunes and whatever it is that’s growing in the dunes. 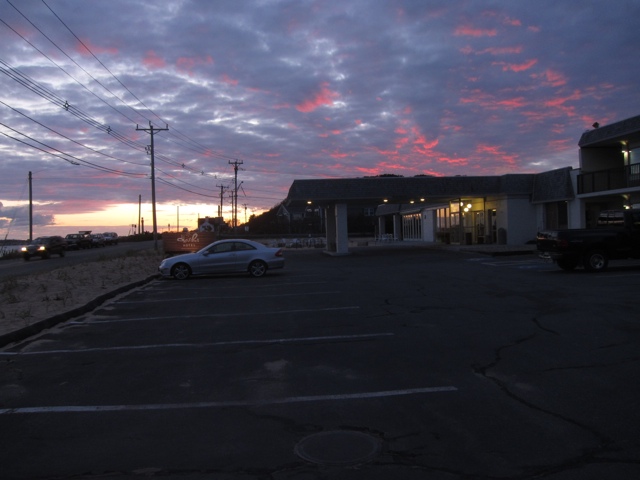 Day 1 totals: 16 miles, a nearly drained battery, about a 4,000 calorie dinner. Discovered that I hadn’t accounted for several factors in setting up my mileage goals, including the additional weight of panniers stuffed with clothes, battery charger, etc. and the effects of a stiff head wind and steep, but short hills. Will need to stop and charge at least once a day mid-ride.

Sept. 19 – Provincetown to Brewster. Missed a few turns and spent some time sharing the road with cars on Route 6. Pictured below, possibly out of order, an abandoned motel, a boat in the woods, a cemetery, pretty scenes in Wellfleet, Maurice’s campground where they let me plug in and charge while I ate lunch, scenes from the Cape Cod rail trail, Namskaket Creek. 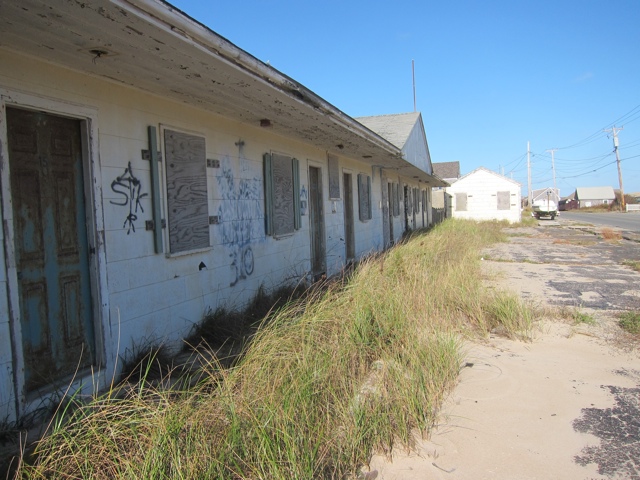 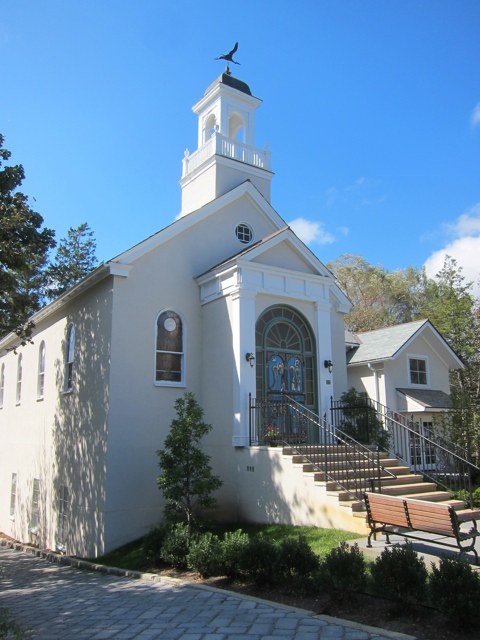 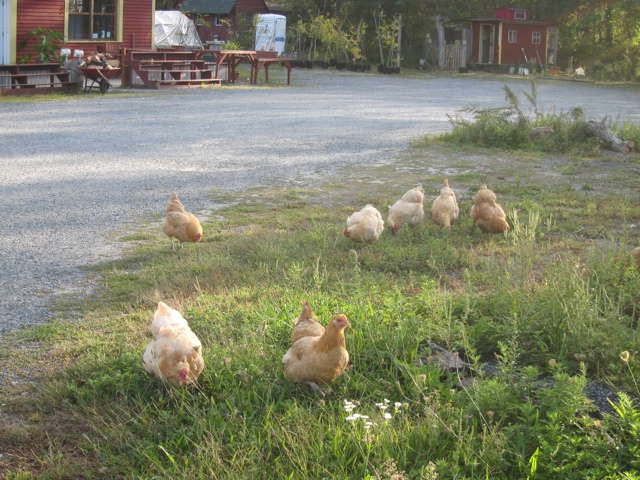 Brewster to Onset, via Barnstable, Sandwich, the canal and the terrifying bridge

Sept. 20 – Left Brewster having totaled 52 miles so far on the trip. 44 miles of mostly paved Cape Cod bike route lay ahead…this was Monday, wasn’t it? I was planning on a battery re-charge stop about halfway through but I had miscalculated on several fronts converging fronts. First, the persistent headwinds – the prevailing winds on the Cape blow west to east – which were somewhere in the 15-20 mph range on my Monday route. These are pedal downhill winds. What that means is that there was little opportunity to coast/rest, and the pedal assist constantly drained the battery. So two charging stops instead of one.

Third, fourth and fifth miscalculation: my ability vs. my mileage ambitions; the distance between essential services/charging opportunities; the lack of a shoulder on primary cycling routes

Made good time to Yarmouth, passed up a gas station thinking I’d find a place to eat and charge a little bit farther ahead. After Barnstable, the route takes you to the inaptly Service Road which runs along side Highway 6. With less than half a charge, I stopped at a rather inhospitable visitor information center where they let me charge my battery outside but wouldn’t allow me to bring it or the bike inside even though it was raining. However, I thank the citizens of Massachusetts for the desperately needed free electric charge.

Met a guy while I was waiting – what was his name – who likes to take the ferry to Provincetown straight to Hyannis (80+ miles), then catch the ferry to Martha’s Vineyard. At this point, miscalculation 6 popped up…I’d forgotten to pack bananas and snacks, and I was hungry. There was nothing to buy except candy.

Anyway, kind nameless Hyannis biking guy told me about Service Road, a series of small hills followed by a mercilless hill, but that at the end there was a nice, steady downhill into Sandwich. Some photos ensue:

Entering Barnstable, where Kurt Vonnegut, jr. once sold Saabs. I was once an avid Vonnegut reader and have had three Saabs in my life. A connection? 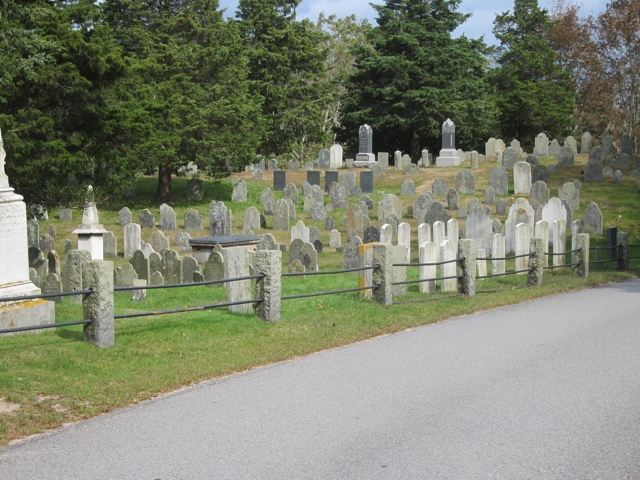 Russell’s Corner, a lovely coffee shop/cafe where I had lunch and where I met one of the owners, a wonderful woman (name forgotten) who let me charge the battery. They make a satisfying espresso. Chatted with a lovely older RV couple over lunch. 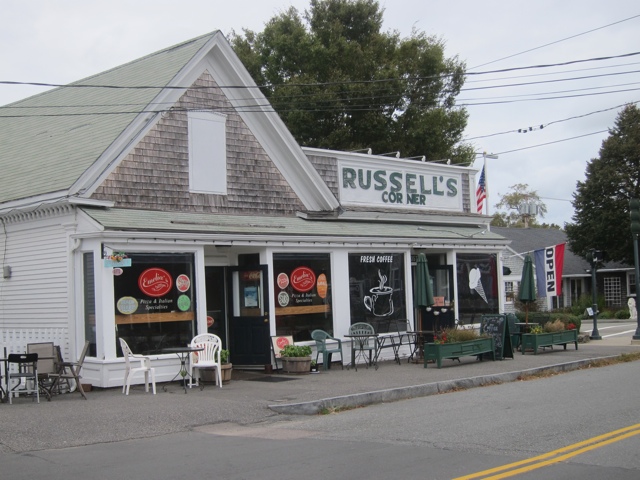 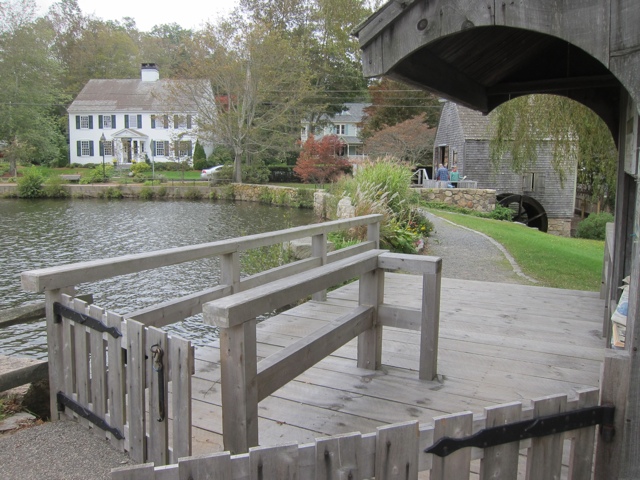 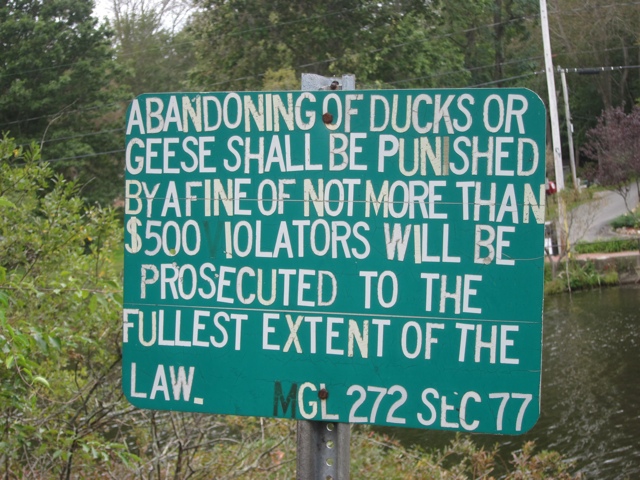 By now with a 3/4 charged battery, a full belly, ample water supplies and lots of daylight, I was feeling pretty good. I pulled up to the canal and rather than plow southward, wanted to see the northern tip and the Cape Cod Bay. There was a military vehicle parked right at the end of the canal, a big green high-tech looking tent, and a swirling radar device of some kind. Just to the right of this scene, and over it as well, untold thousands of birds circled, swooped, dived and made bird noises… Here are pics and possibly a video. 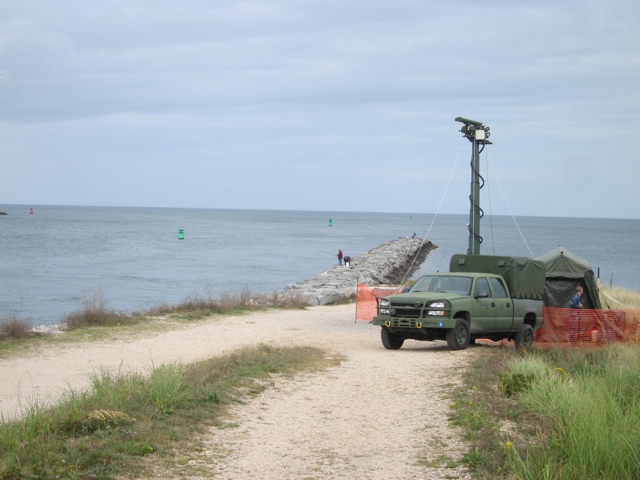 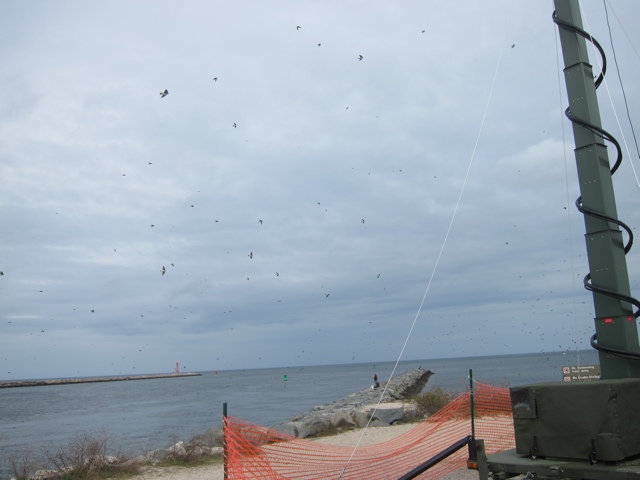 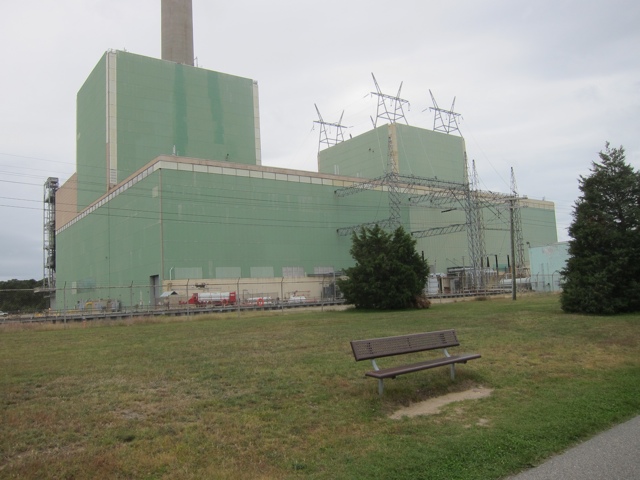 A man works on the Sagamore Bridge. 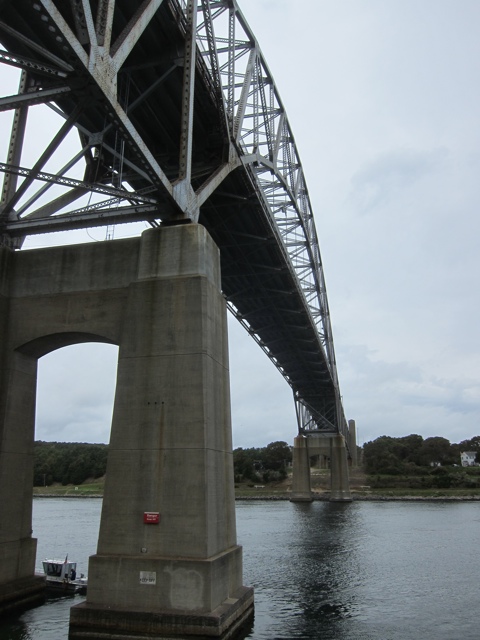 Walked the bike across the Bourne Bridge, Sagamore’s twin. 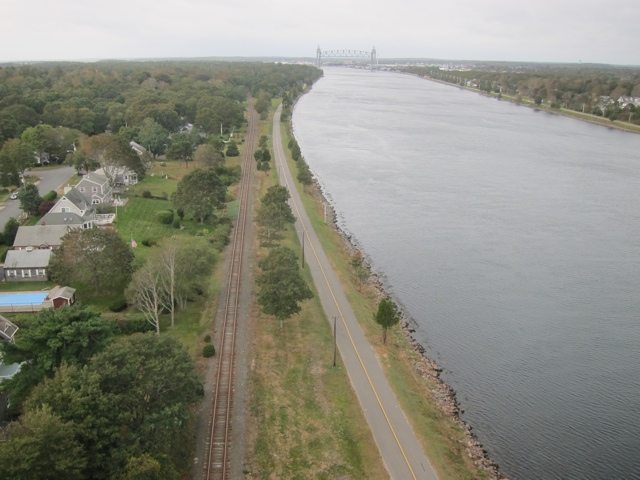 The rest of the way to Onset, flag straightening wind in Bourne, Buzzard’s Bay and Wareham.

Finally arrived at 4:30 at the Pont Independence Inn stiff, sore, and irritated with the wind for its unyielding direction and strength.

Onset to Seekonk to Narraganset to NYC and 1 dog 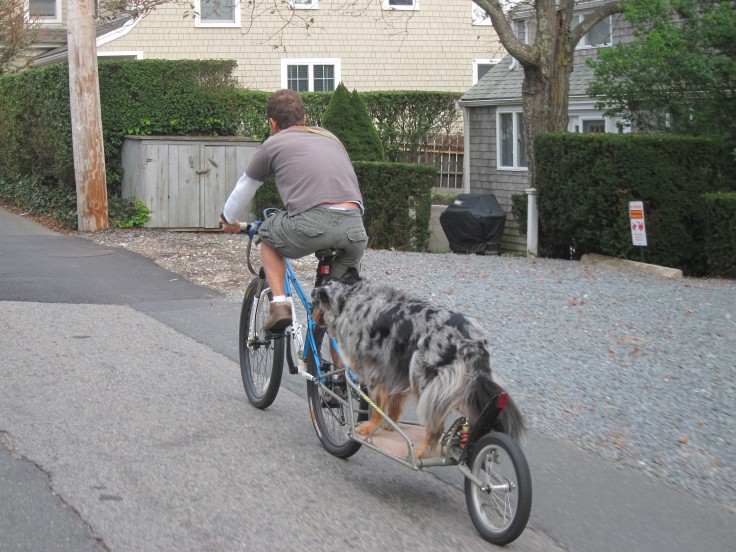 Shortly after arriving in Onset, another miscalculation came into focus: I hadn’t built in any rest days. So after a day of some mild touristing in the area and some asking around, a fellow named Dave appeared offering a ride to Seekonk. Here are some typical tourist photos:

Statue of topless native woman gazing out on the harbor at Onset. 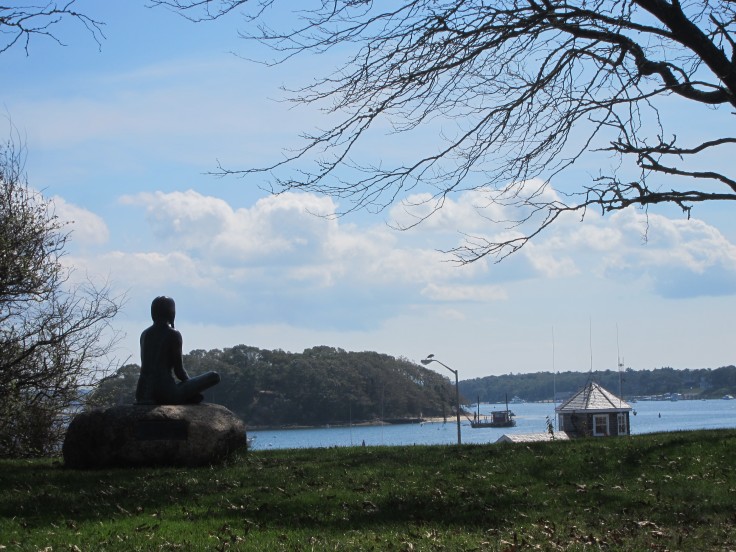 The Victorian with the red roof is the Point Independence Inn where I hung around enjoying the warm sea air instead of riding. 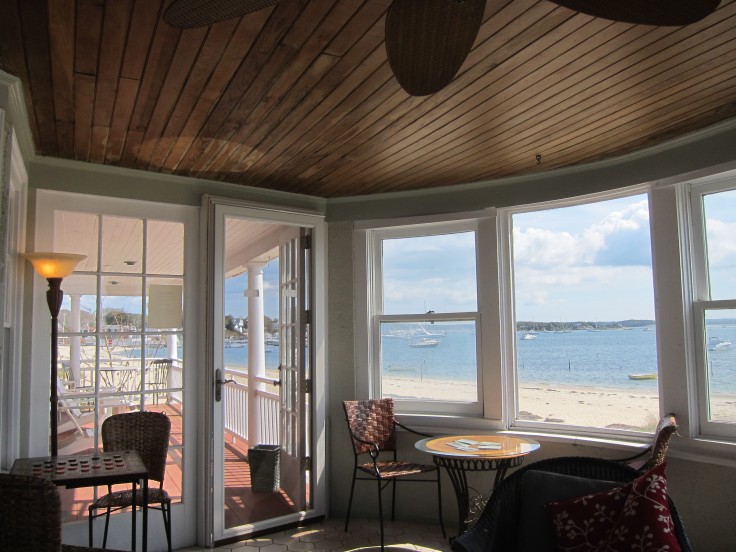 Arrived late afternoon in Seekonk at the beautifully restored Jacob Hill Inn run by Bill and Eleanor. Breakfast was their world-famous French toast stuffed with raspberry preserves and cream cheese – really good, along with homemade granola, assorted fruits and muffins. Set out that morning for Narraganset in the rain, soon passed a rent-a-car lot, rented a car, stuffed the bike in the back and continued to my destination in the downpour. 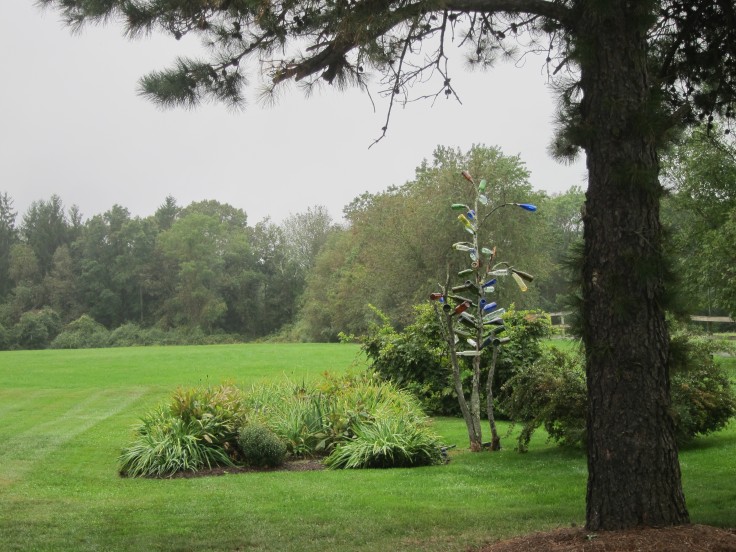 At this point you’re thinking, “What?!? A little rain and he packs it in, calls it a day, quits? Where’s the story of triumph over injury and middle age? You call that a challenge?” You have every right to demand your money back. My three-pronged weather checking system: NOAA.gov, weather.com and local TV news all had rainy predictions stretching into the next six days with a possible break today (Sunday). Hell with that.

About a half hour from Narraganset, the tempest stopped and blue sky appeared. Had I yet again miscalculated? Was my trust in three weather sources misplaced? I released the bike from its entrunkation and set off to explore the area in the remaining daylight. 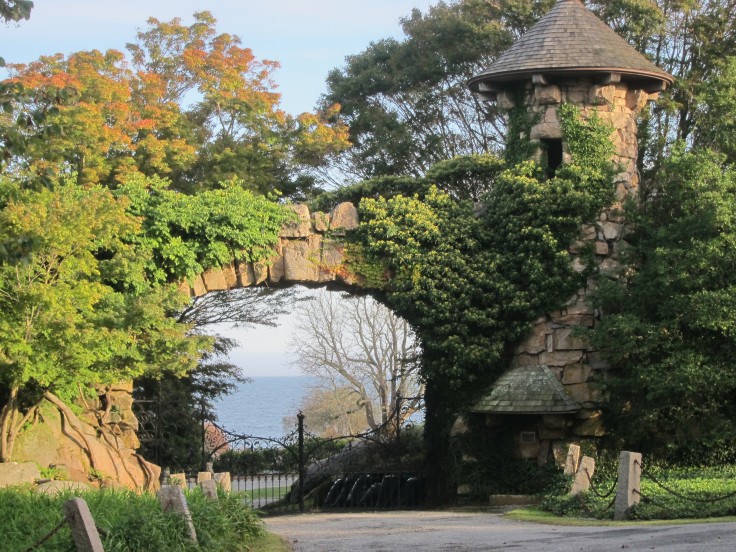 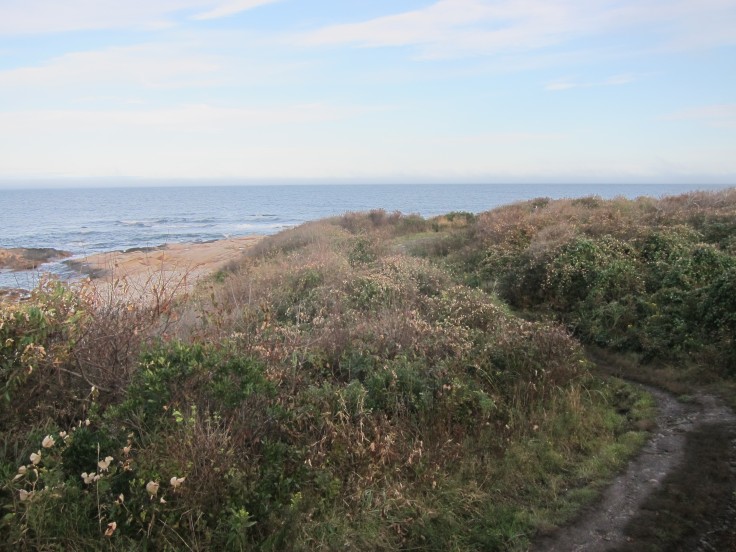 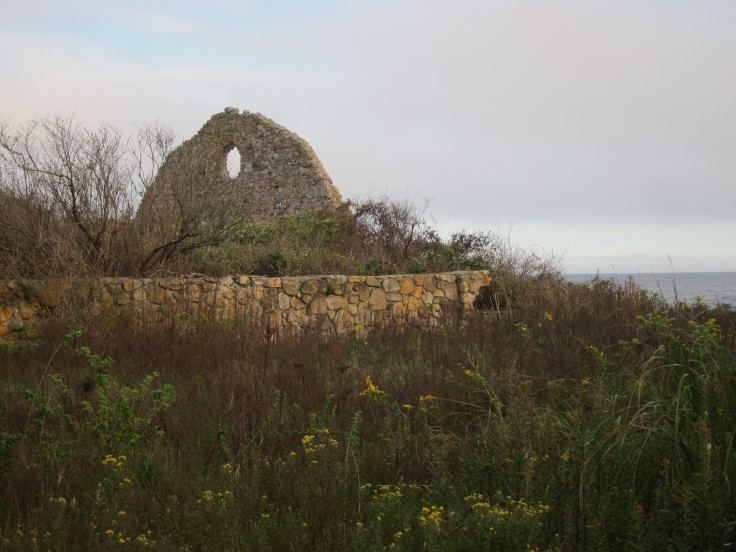 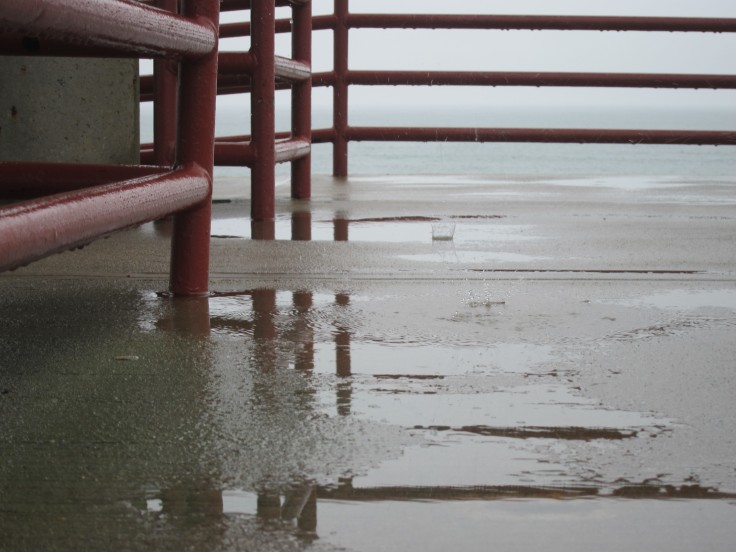 The car of the future today