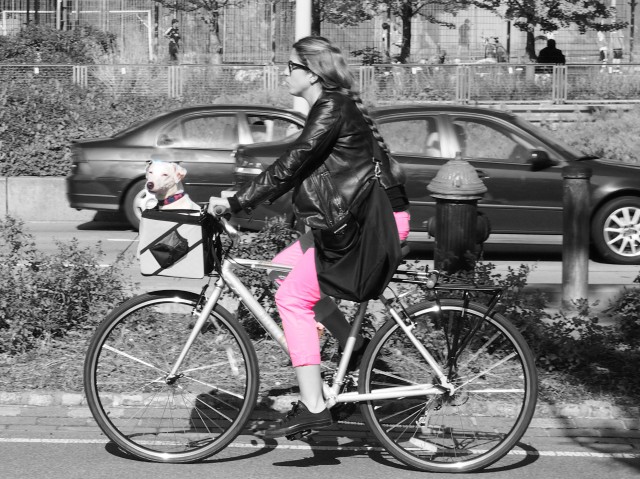 “It’s not going to work until you get rid of the glare. You can’t really see the dog’s head.”

“OK, but in the meantime, which one do you like better?”

“Until I get that stupid glare to go away neither of them work.”

She began cursing because she doesn’t like using a touchpad. She showed me which tool to use (it’s the burn tool which looks like a hand that’s ready to grasp something). I messed with it but it didn’t look right, so I went to clone. I don’t like doing clone or actually anything that takes more than a click, but I did it because she wasn’t going to cooperate otherwise and sometimes you just have to make concessions, you know, let it go.

So I cloned and then burned and then it looked OK, and then I did the part that I liked which I’d only recently learned for the post “His Master’s Voice.” This lets you make the photo black and white but highlight a color or two. Here are the directions because more than anything, this blog is about teaching. Yep, it’s all about sharing my vast slice of knowledge.

Here are the steps in case you’re interested, copied from an Adobe photoshop elements community:

1. Get out the Smart Brush, the one with the gears on it.

2. Choose a black and white conversion style from the options bar and turn on the Inverse checkbox.

3. Brush over the object you want to keep in color. The rest of your photo will turn black and white.

The tempest lifted and tt all worked out in the end. She picked the version you see above, I learned to use another accursed photoshop feature (which is rapidly slipping from memory), and something else because we must always list in threes.

I write stories. You can read my work and see my photography at deficioscriptor.com or see my pictures of dogs at dogsandbikes.com. View more posts