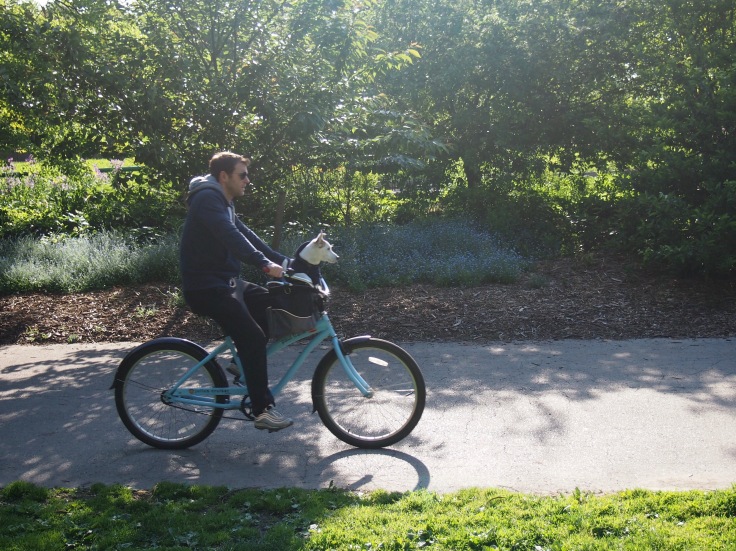 It was a good day for the guy in the hoodie. He rode with Prince Antoine northbound in Riverside Park around 81st or 82nd Street hoping, just hoping, that they’d be seen and photographed and posted to this blog. It would make them famous. They passed a guy – who they didn’t notice – with a camera who’d gotten off his bike to try to get a good shot of a Red-tailed hawk. That was me. I couldn’t get a clear view of the hawk, but I did get the guy and the dog and the bike. Four years later, the time is right and Dogs and Bikes posts the iconic shot. Four years hoodie guy and Prince Antoine have waited. May all of their dreams come true.

A few years ago, I had been on a longish ride from the Upper West Side of Manhattan to the George Washington Bridge, down to Battery Park and back to where I started. I had my camera with me but despite the perfect weather had not seen a single dog in a basket all day. I was somewhere in the 50s, block-wise, and passed this young woman and dog going the opposite direction. I did a u-turn, passed them and waited for them to ride by, which they did. 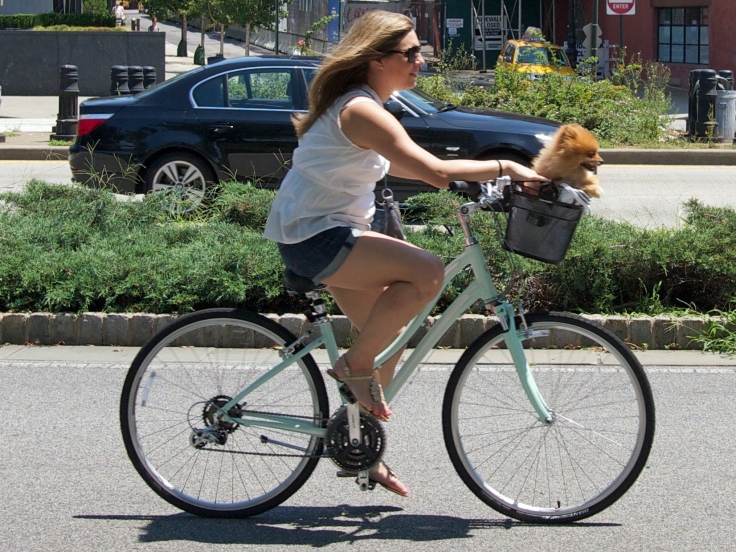 The car passing in the background ruins the shot, however, we live in a car world and if you think about it, cars ruin everything except road trips on winding country roads. And fooling around in the back seat.

Anyway, we moved from New York a few years ago and I don’t see dogs in baskets anymore. You need that critical mass of millions of people crammed onto an island to have a chance of catching dogs in baskets. Sure, you’ll see one now and again, but do you have your camera with you at that moment? In NYC, there’s a better than 50-50 chance of seeing a dog in a basket on a weekend ride or a walk along the loop in Central Park.

On our infrequent trips back to the city, I’m there, camera in hand, looking for that freewheeling pup. Meanwhile, I post stories on another blog and if you like stories, many set in New York, here’s the link. 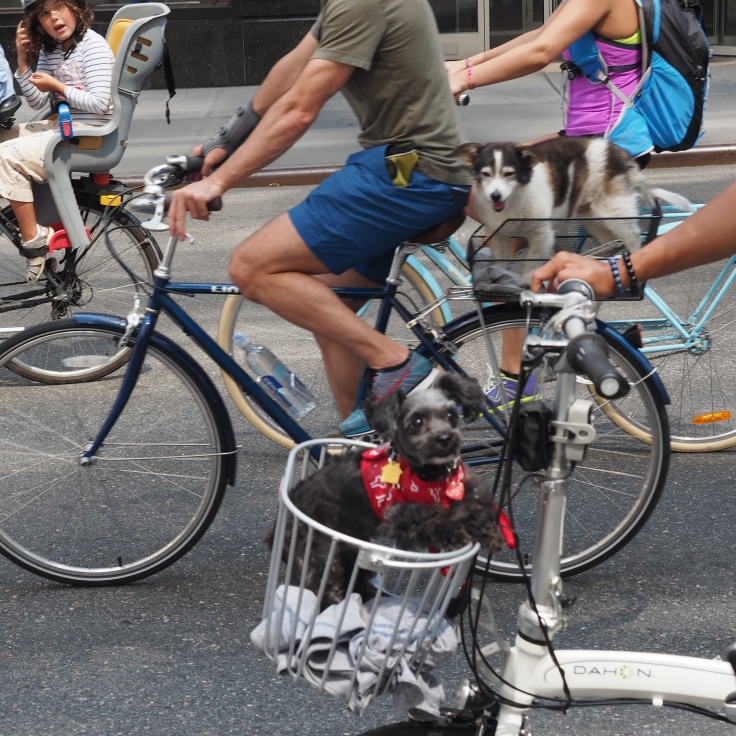 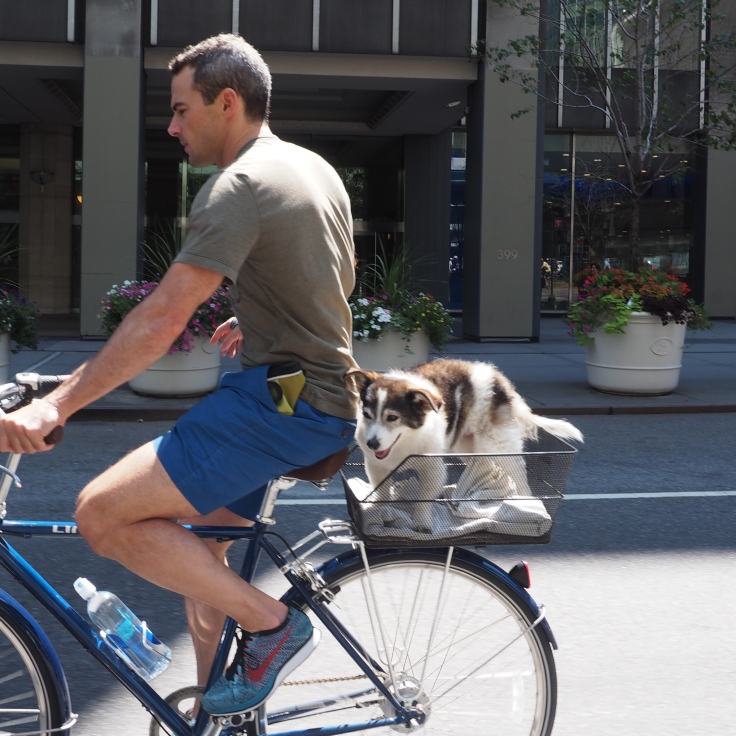 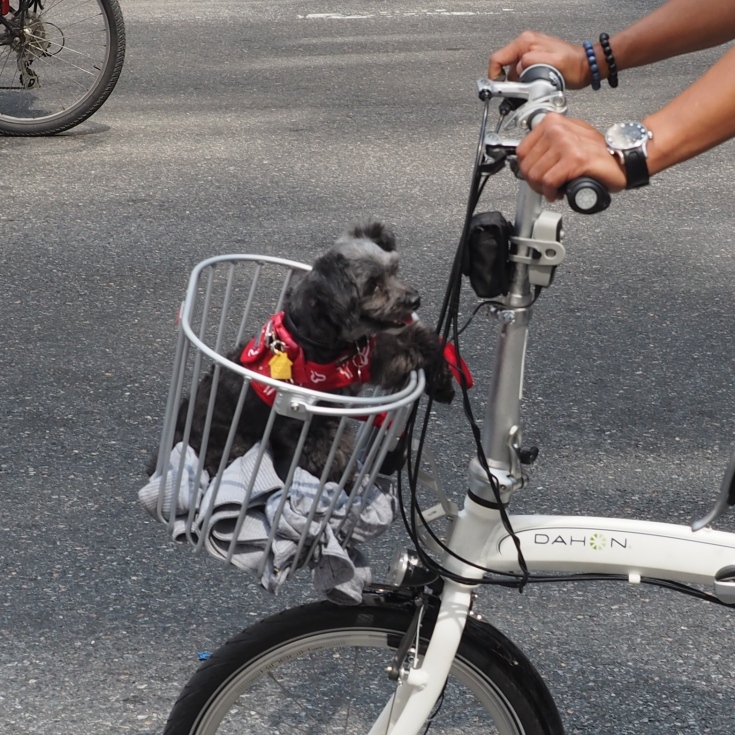 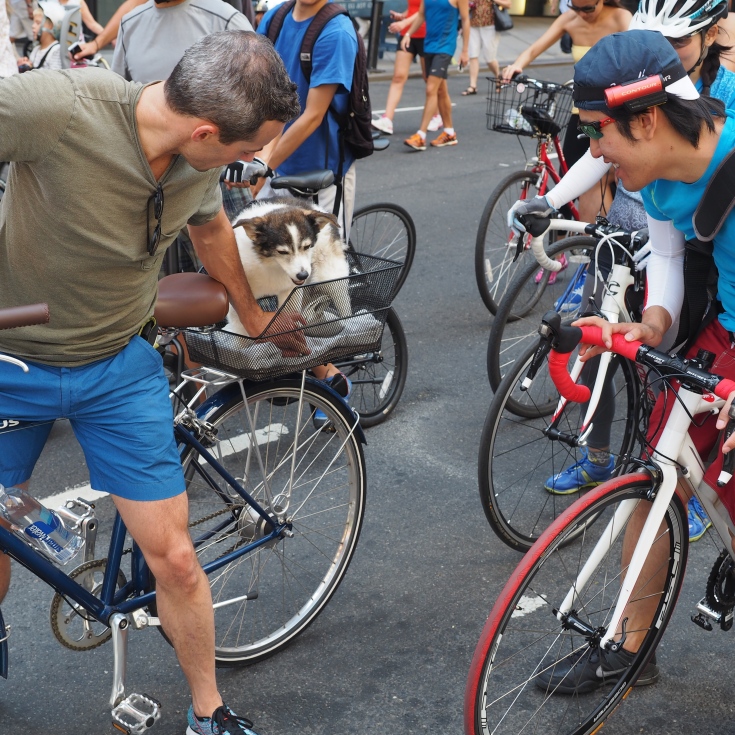 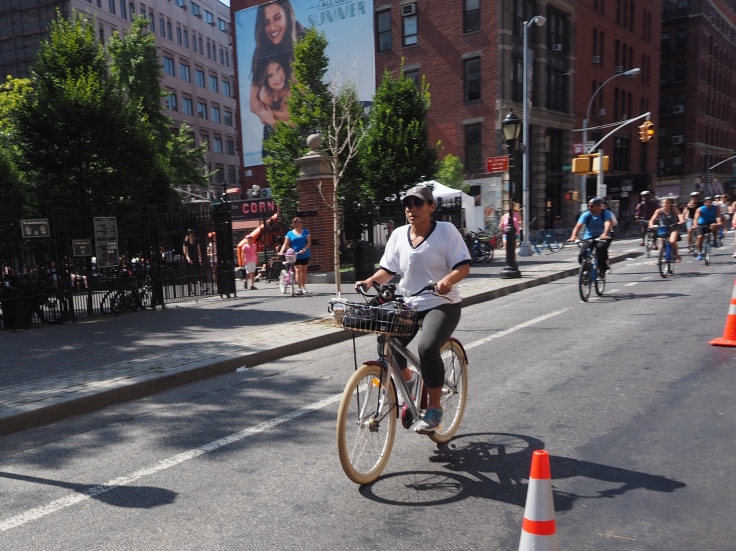 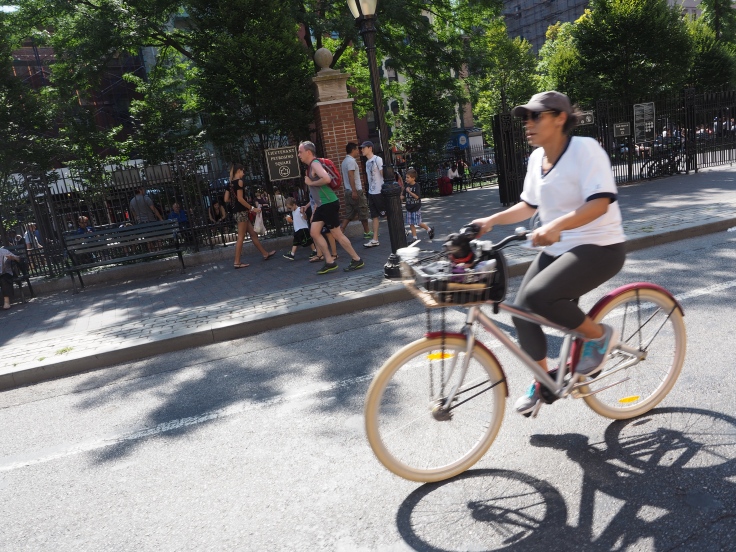 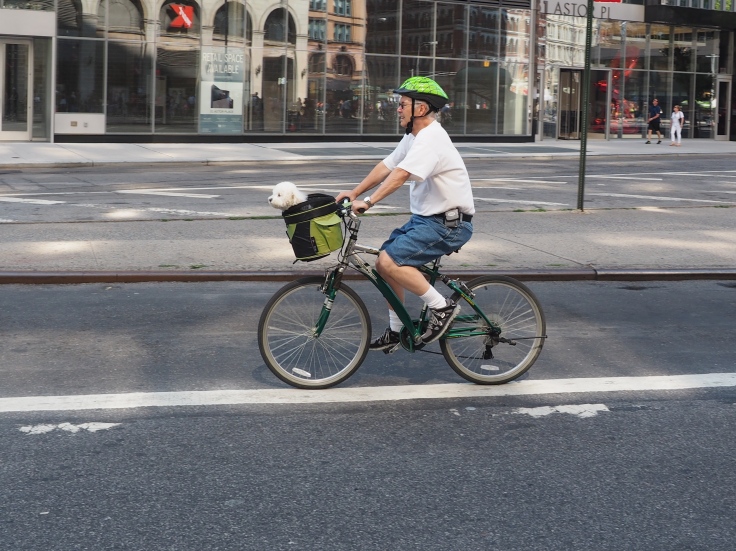 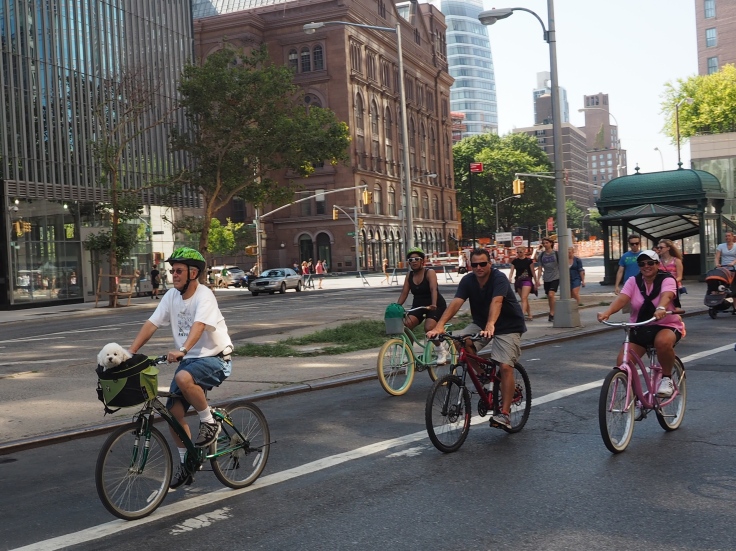 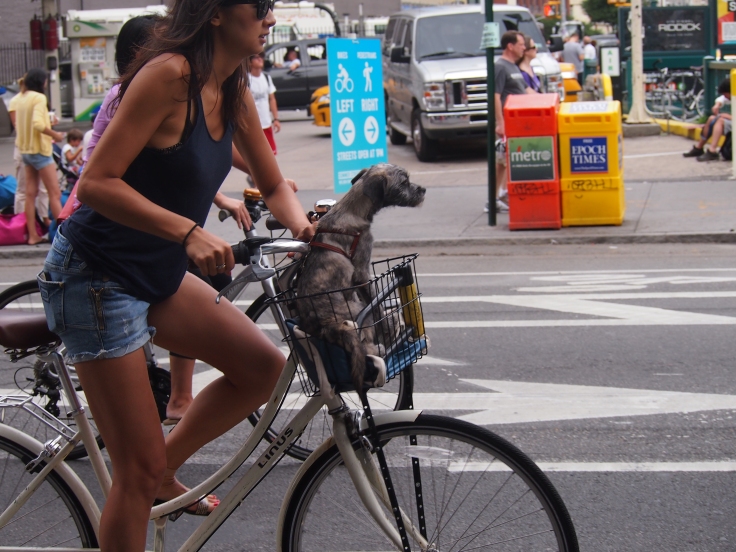 In anticipation of the upcoming Summer Streets in NYC, another never before posted photo from the found archives. If you’re visiting NYC this weekend, get your hands on a bike and take a ride – there’s really no better way to see a nice stretch of the city sans cars.

Probably un-posted since I cut off half the rider’s head.

I found a folder of photos from last year’s Summer Streets, three Saturdays in August each year when Park Avenue/Lafayette Street from the Brooklyn Bridge to 72nd Street is closed to cars. I get a kick out of the dog peering over the basket slightly cross-eyed, the big bell on the handlebars, the funky panniers, and of course the red sneakers. 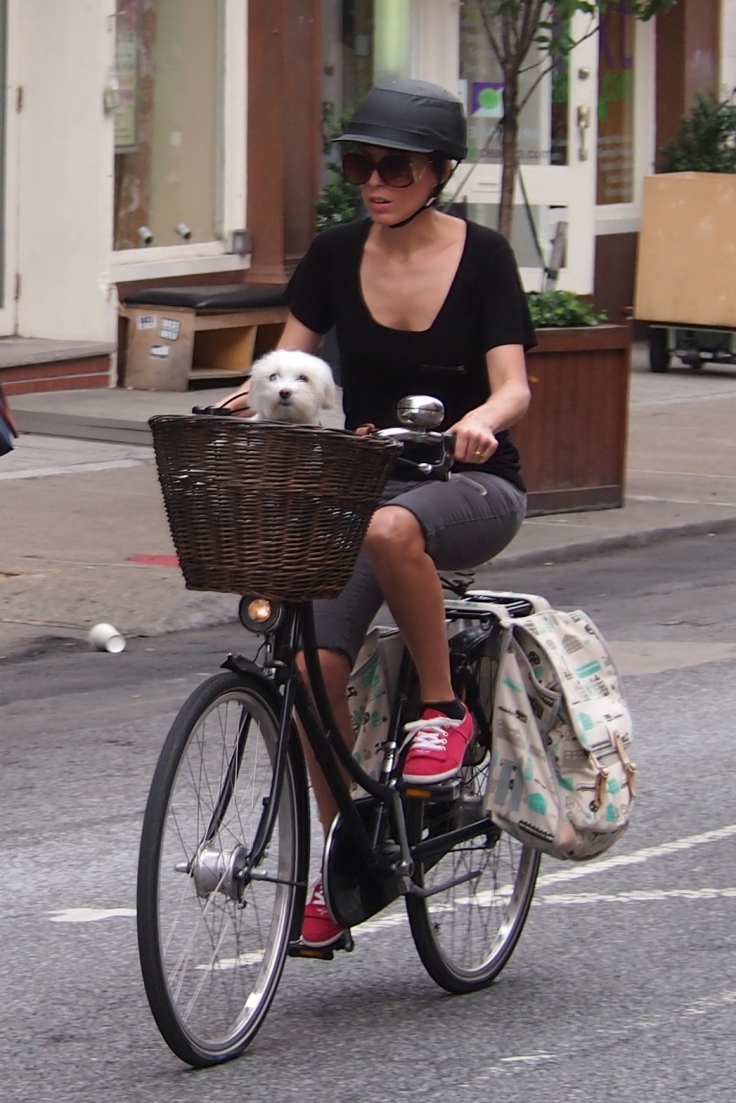 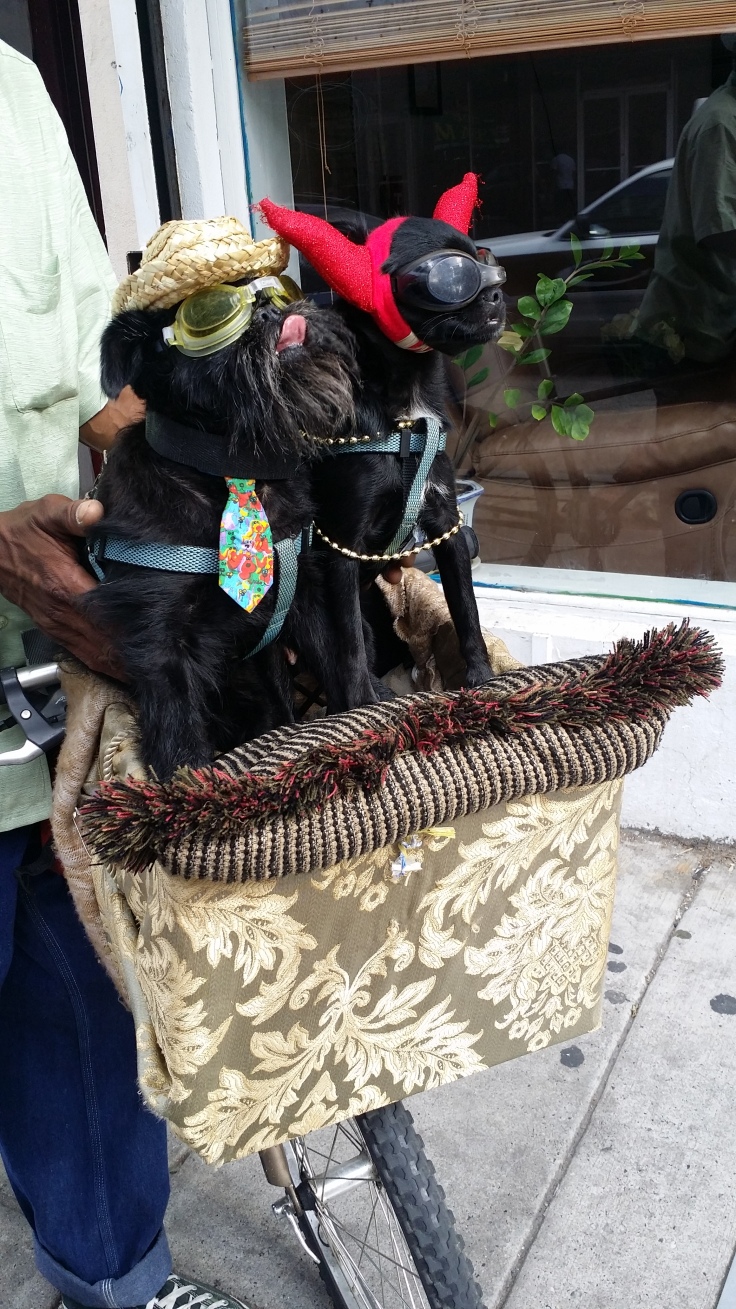 It pains me to say it, but my sister nabbed this terrific shot on a recent visit to Philadelphia. 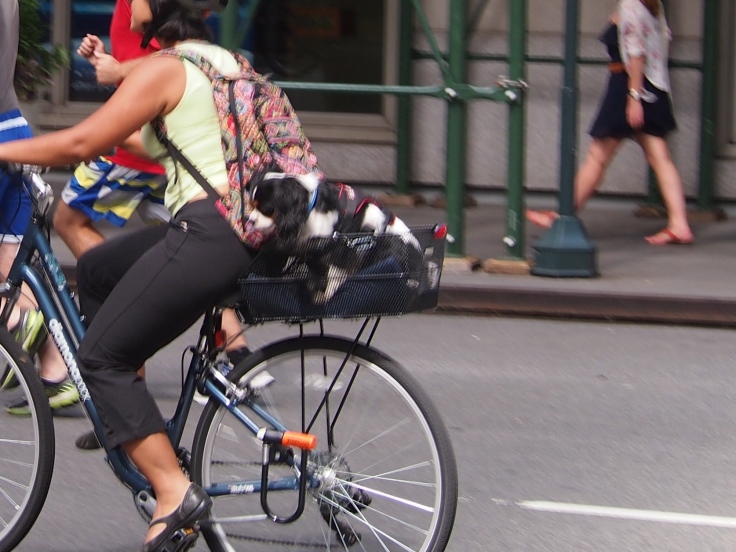 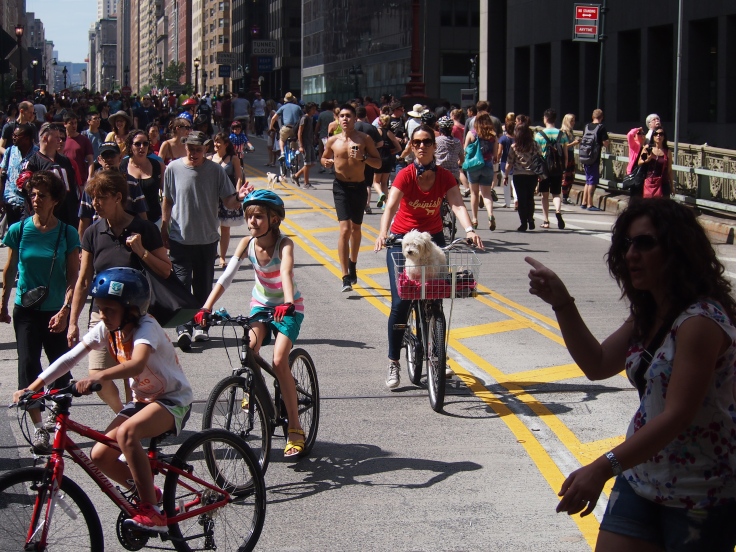 I’ve been thinking about the loop in Central Park lately…how it’s just a big hamster wheel for us humans, our contraptions and our mostly canine companions. 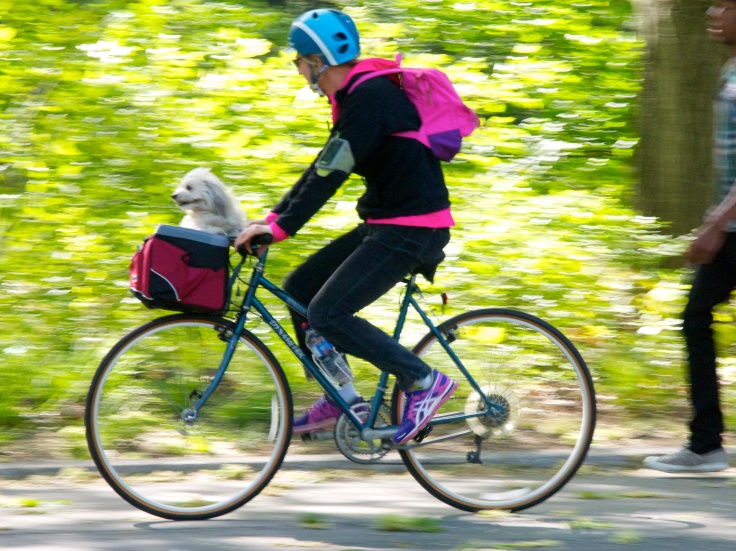 She was riding clockwise against the flow and you get the idea pretty quickly that the park loop is designed to go counterclockwise. The entrances all send you – cars when those demons are allowed – and bikes, skaters, surfers, rollers, sliders, runners counterclockwise. It just works that way. A few go the other direction. 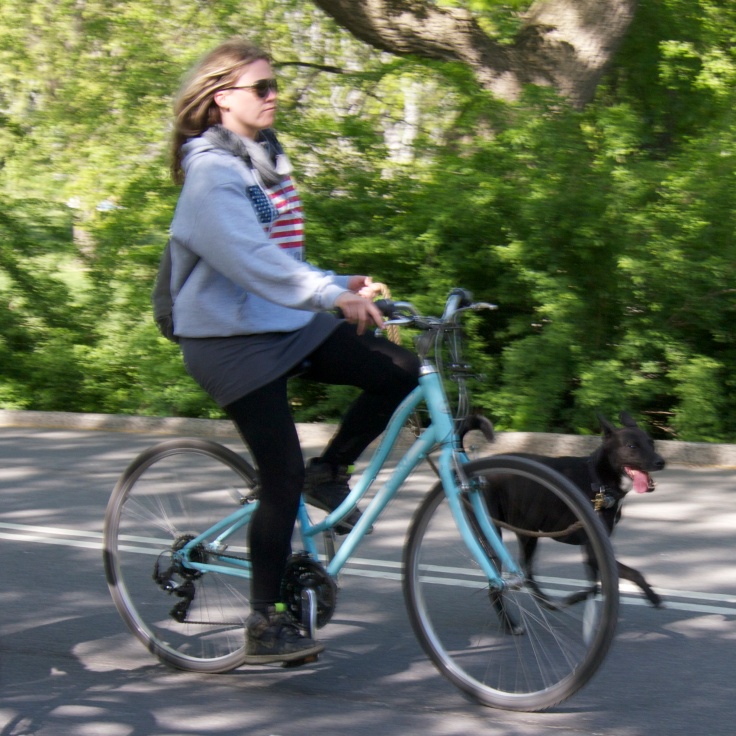 Central Park exists for those of us who live here and for those of us who are tourists. It’s not for the nearby suburban because they have theirs and who would drive to a city just to sit under a tree? When you walk or ride you hear all the accented voices from faraway places: The British Isles, Europe, Russia, the Baltics, the Middle East, the Asia Pacific, the Caribbean. And sometimes Kentucky or Arkansas. 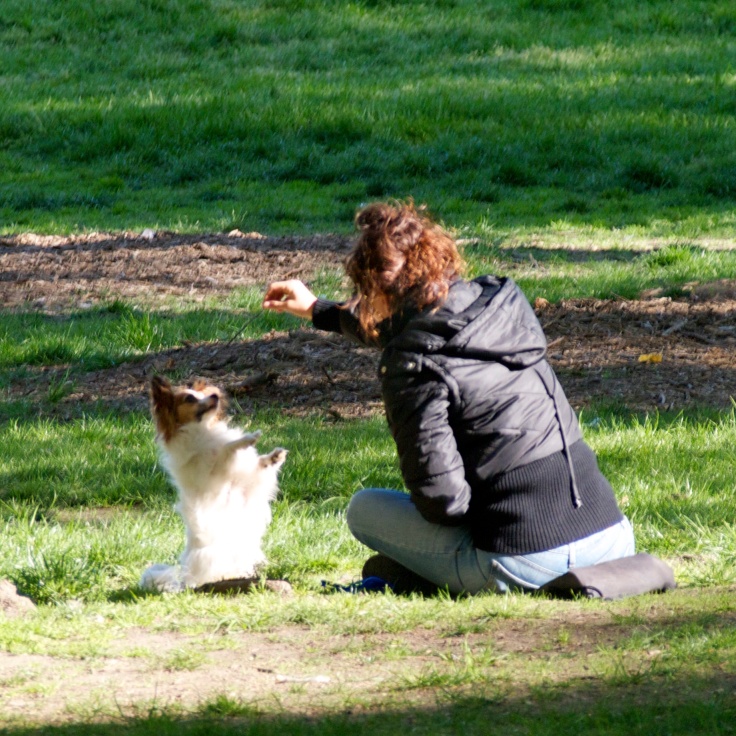 I stayed and watched too long these two playing a food game and some fetch. I took a longer time to walk around and lingered a lot. You see, we’re moving out – not too far away. Just 25 minutes by train and the time will be here soon enough that I won’t just bumble into the park for a walk. I’ll have to go out of my way and it won’t happen much because there will be trees and park a little bit fresher air where we’re going. 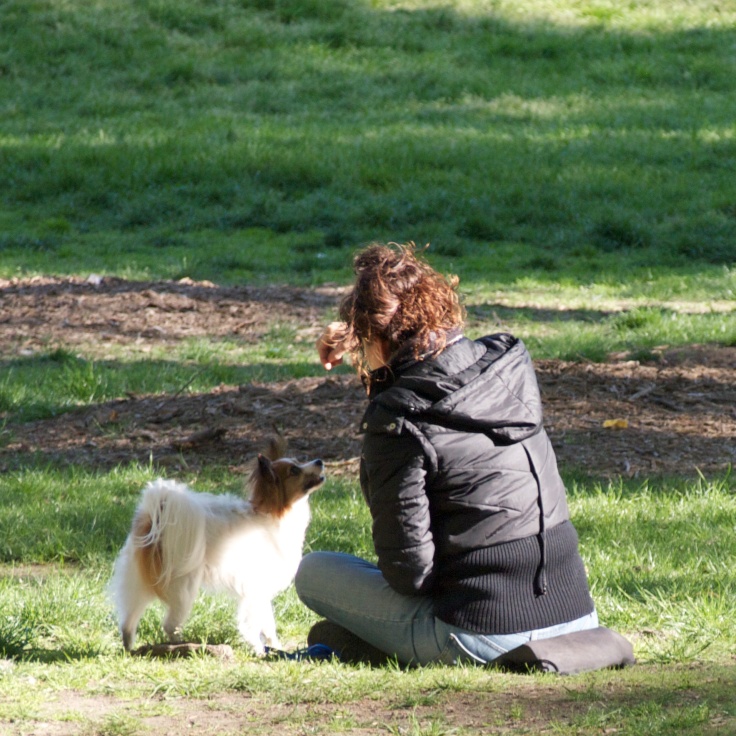 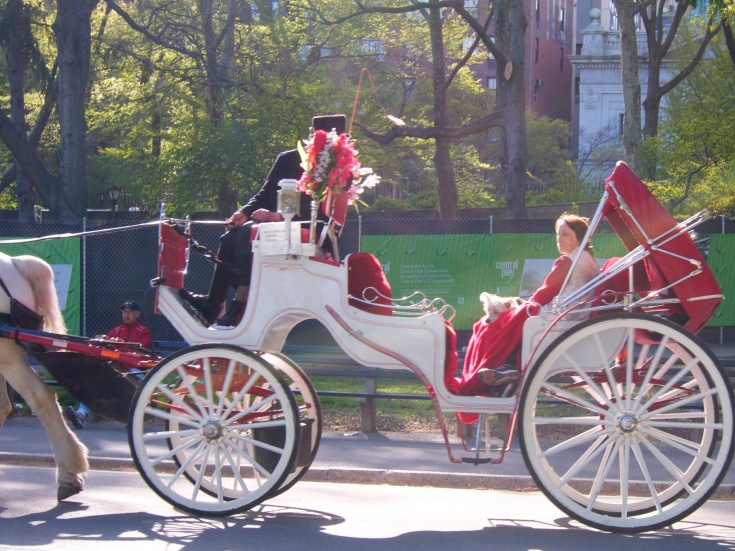 And, hey, get this – fencing with foils amid the frisbees. 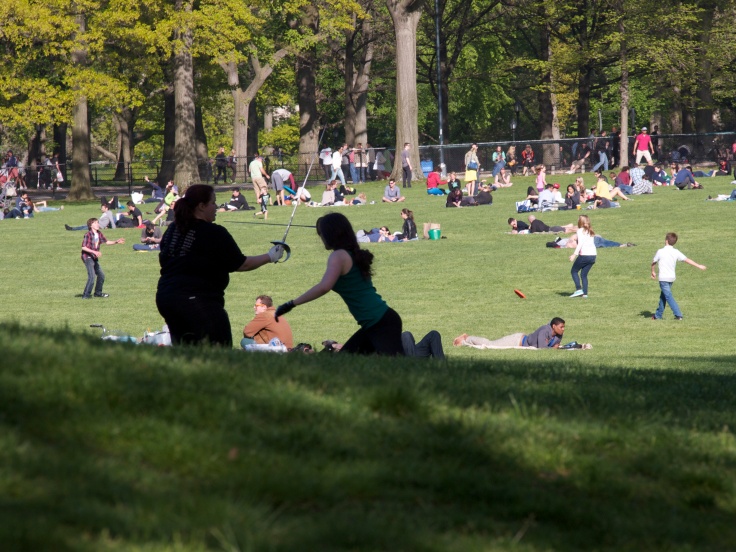 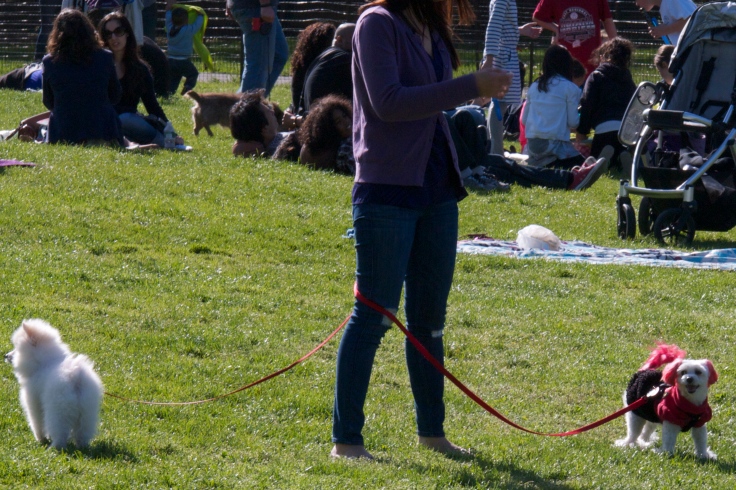 This man takes his old Sheltie in a stroller. He left him out for a few shaky steps, then back to the cart. They both seemed OK with the arrangement. 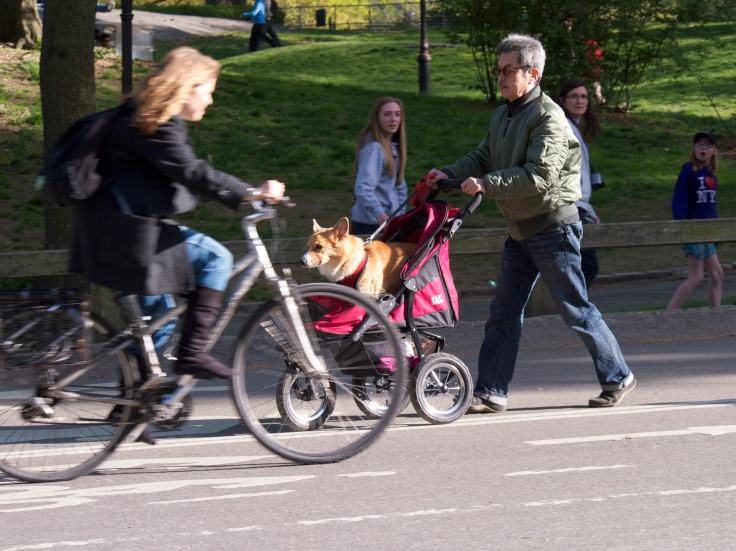 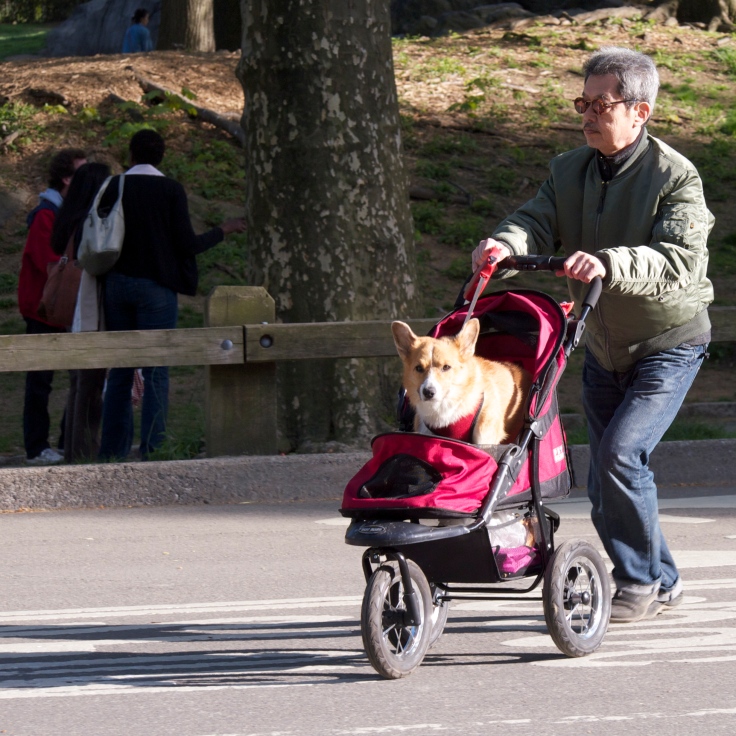 I will miss the crowds I curse when I want a quick spin around the loop but everyone’s chaos and not interested, not at all even aware. I’ll miss these scenes too: 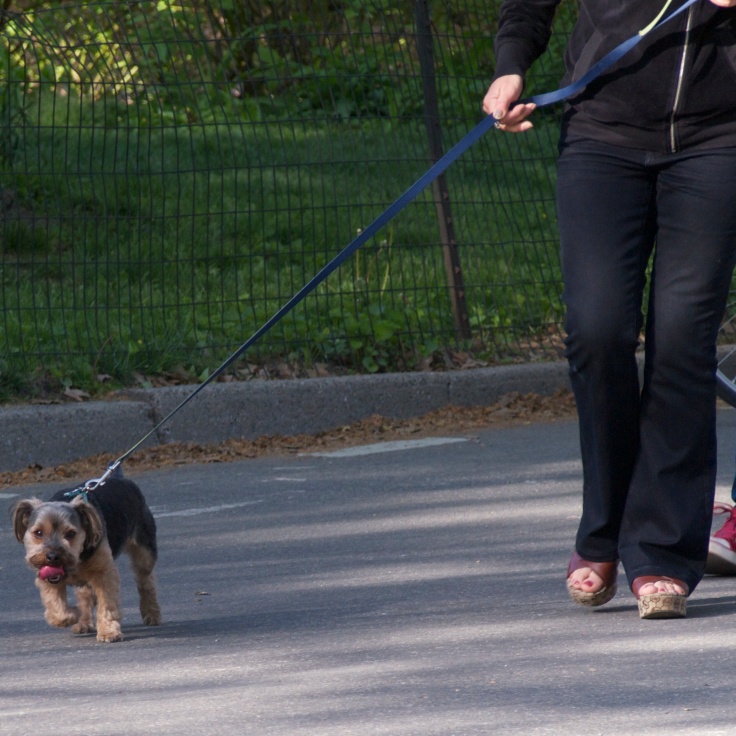 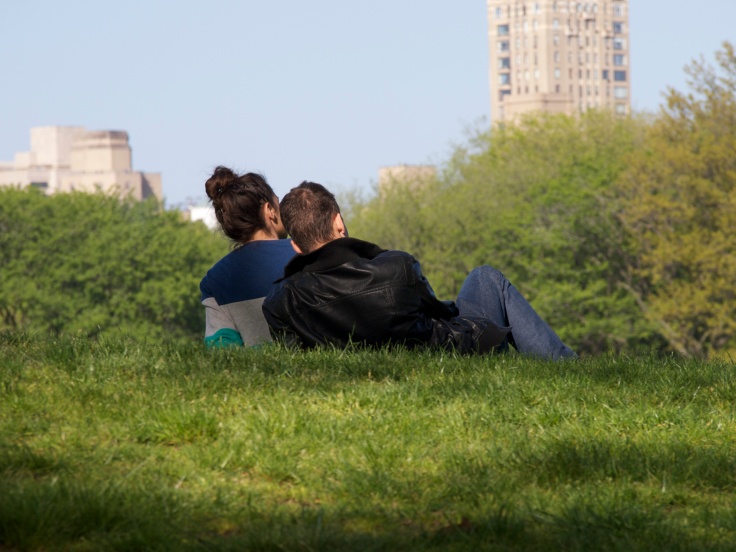